Live From the Full Shilling Your Sunday Blog Cast 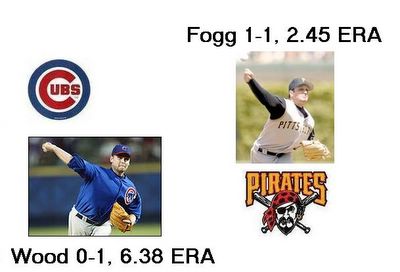 1:12 I just finished my FREE hot dog at the Full Schilling. Looking at the lineup, Dusty has Hairston in cf, Perez at 2b, and Ronny Cedeno is playing ss hitting eighth. It's still cold out. No snow and the sun is shining. First pitch in a few minutes.

1:20 Wood winds and fires to Lawton. The ball gets by Barrett and goes to the backstop, we are underway.

1:24 Strikeout, throw 'em out DP. Barrett throws out Lawton trying to steal. One away.

1:28 Dave Williams pitching for the Bucs. Hairston leading off grounds to Ward.

1:37 Bobby Hill - the newest member of the Cub killer category - bouncer back to Wood, he drops it, recovers and throws Ward out at second.

1:40 Cota doubles down the lf line. Hill to third. Second and third two out.

1:41 Sanchez hits one off the wall, two runs score. He's on second. Kerry is struggling as usual this season.

1:42 Wood strikes out the pitcher. The damage has been done. Bucs 2 - Northsiders 0. Wood has already thrown 32 pitches.

1:47 Burnitz with a full count strikesout.

1:50 another leadoff walk. This guy is really flirting with trouble.

1:54 Len and Bren are not very good on a hangover. Wood is all over the place. The guy's struggling with his control. Wood comesback and fans Ward. Nice comeback for Kerry.

2:02 Hairston pops to the second baseman. For some reason Wood was running and he's doubled up.

2:10 Neifi Perez goes 370 feet to LF. Cubs finally on the board. I think I was poisoned last night. Too much post game fun.

2:12 Aramis up single to center field. 3 straight hits for the Cubs I think we were all a year younger when that last happened.

2:18 Cedeno popped up to Sanchez

Top of the 5th

2:20 Sanchez (yesterdays hero for the Bucs) strikes out

2:25 Lawton gets a double to LF Dubois missed the diving catch, but we all know that Hollandsworth would have never got there.

Mid 5th (restroom break for me)

2:32 Neifi (double and atater just two away from the cycle) out on strikes.

2:32 Young Will has just made his first booty call. Yes folks, its still daytime.

Top of the 6th

Pitching change - Rusch is in the game

2:35 Ward with a Texas leager sinlge.

Middle of the 6th Cubs 4 Pirates 2

Bottom of the 6th

2:41 Travis isn't drinking, he's just been accused of having a yeast infection.

2:42 The "Believe" bracelet has been just plugged. How many does LaTroy wear right now?

2:45 Just missed the last two batters, they were out. Cubs lead, no one cares. And the third batter.

2:45 Hey! Cook just came back from the game. All faith has been lost, but the Cubs should win he reports.

2:46 CornCobb Dress just decided to take a trip around the park. Will he streak? Stay tuned

2:51 Lawton flies out to LF short. Sanchez was held on 3rd no run yet for the Bucs.

2:54 Mackowiack out to Burnitz who inexplicably guns the ball in. What the hell are you doing? That was the third out.

Bottom of the 7th:

2:56 Barrett grounded out to ss

3:05 Michael Wuertz steps in a set up role for the cubs, is it another bullpen disaster or are we going to get an inning of solid releif? Stay tuned, Bay goes down swinging, Wuertz got him to chase a fastball low and away. 1 out

Wuertz is plugging away throwing in the mid eighties and the low ninties. I can feel Hawkins in the pen...Wuertz unable to find the location and walks D. Ward, 1 out man on first...THe tieing run at the plate.

3;10 new developement in the Cubs bull pen, Wuertz got B Hill to ground into a DP, and the Cubs are out of the 8th.

3;11 The Cubs are moving the 9th as Natialie points "isn't this a fast game?" Why yes it has been a relatively quick game, and hopefully it will be a W...

3;12 C-PAt leads off the inning with a Willie MAys Hayes bunt laid down the 3rd base line. Hairston shows bunt, and it looks like the Cubs have figured out that small ball can actually work, it's not just for little leauge.. New concept...get guys on base that have speed and maybe they can actually score some runs... Hairston lays one down back to Vogelsong Valder-dee Valder daaa VAlder dee dee da da da..1 out man on second

3:15 Knifefight Perez up to the plate, Frozen rope to center scores C-pAT FROM SESECOND 5-2 CUBS!

3;17 1 out man on first and the bohemeth they call D. Lee is up to the plate, Vogel wild pitch gets by Cota, and Knifefight takes second. D lee hits a pop=up to the lower end of the stratosphere, and fielded cleanly for out number 2.

3:19 Man on second 2 down and the Cubs favorite son Aramis Ramirez is up to advance Perez. Looks like Vogel-wuss and the pirates are going to Intentionally walk A-Ram. Someone in the crowd was giving hte international sign of the chicken, clucking his arms at Vogel pansy.

3:20 1st and 2nd, 2 outs Mulletsworth is up. Todd has had a slow start this year and lets see i fhe can light up Vogel song to gvie HAwkins all the room in the world. Hollandsmullet takes 4 balls and here comes teh burnitcalypse..

3:27 Jeromy smacked a 3 banger in the 4th, lets see if he can it a salami here in the 8th. Vogelmeat takes the count to 2-2. Full count bases juiced, cub-dom on their feet. Fly out to right and the inning is over.

3;29 Lets all bow our heads down and say a little prayer for the top of the ninth. and the possibility of closing this game out with a W.

3:30 HEre we go top of the 9th, Chad Fox on and this is actually refreshing. LEts see what the Fox can do. C Wilson takes strike three and we are 2 outs away from a victory

3:31 Cota comes to the plate and grounds out to LEe and Derek takes care of him on his own. 2 outs.

3:32 Sanchez (aka Durty) up for hopefully to end the inning and give the Cubs a W. 3-1 is the count, and Durty Sanchez talks a walk.