i've rambled here about the cubs' and cub fans' problems with self-control, which were so evident in zambrano's opening day ejection. but i think that i understate the nature of the problem severely if i limit it to wrigley field and the cub clubhouse.

in the aftermath of last night's near-brouhaha following a play on a ball rolling down past pesky's pole, in which a boston fan took a slap at gary sheffield, i think more can be said about the general deterioration of fan behavior at ballparks in america. (and i don't exclude myself.)

now, mobs have always been reckless. john mcgraw in 1894 famously sparked a brawl in an orioles-braves game, into which the crowd joined, that resulted in the destruction by fire of over 170 buildings in boston's south end.

but things changed quite a lot between 1894 and 1950. the america of 1894 was a rapidly-industrializing primitive backwater; while europe basked in the antonine light of la belle epoque, the united states resembled nothing so much as perhaps current-day india or indonesia. the masses were uneducated, destitute, discontent and easily riled to anarchy. law and order were frequently kept only by open suppression (as surrounded chicago's haymarket riot, for example) and even military intervention (as in the pullman strike, also of 1894). fort sheridan, after all, is located where it is to ensure the ease of calling the army into chicago to keep order.

by 1950, america had been more fully integrated into the mainstream of western civilization (or what remained of it). public schooling and the advent of socialism had done much to reinforce the rule of law, and war and depression had forged an national character which valued sacrifice and discipline. the idea of a riot in the stands at a ballgame -- or attacking a player -- became as inconceivable an affront to society to the average american as it had been to the average victorian gentleman of london.

now that has changed again, it would seem. prosperity and freedom have worked their epicurean spell as law and discipline has relaxed and sacrifice has become increasingly disdained for selfishness and arrogance -- and the effects of our self-centeredness are showing in the entropy of society, not least in baseball. fans taking a poke at a player or charging the field in a complete loss of self-control are reflective of a declining sense of order and increased confrontation on the field. for players, long gone are days when a knockdown pitch could be construed as a simple signal understood by both parties; now, it is an attack on manhood, an affront to inflated pride, and an excuse to act upon delusions of self-importance. for fans, acts of self-expression are no longer confined to cheers and jeers. short of charging onto the field, childish outbursts have become the norm at the old ballpark. 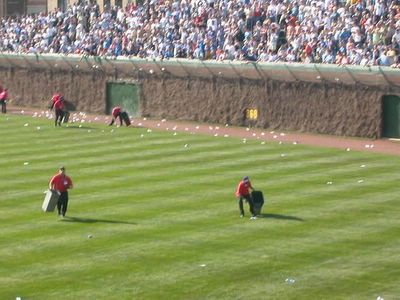 while i'm sure no one wants to return to the barbarism of emerging-market america, i can't help but wonder at what sign or symptom these acts are manifest of.

it's too much to read into this single sheffield incident the decline of civility. but, insofar sport is a mirror of the society which produces it, there is reason to fear for all of us in the broader decay of sportsmanship and collegiality in baseball among both players and fans. as a lover not only of baseball but of the magical interplay of life and law that it so perfectly symbolizes, it saddens me deeply.
Posted by gaius marius