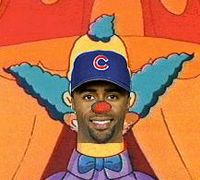 Baseball Tonight just reported that the Cubs have sent Corey Patterson to the minors. Well it's about time.

UPDATE -- Korey the Klown and Jason Dubois were both sent to Iowa. Matt Murton and Adam Greenberg have been called up to the big club. (Probably to sit on Dusty's bench)

CCD's take: Oh where to begin. Patterson had some trade value even this spring. Being sent to Iowa, I'd say all of his trade value is gone. Many will play the blame game with Patterson: it's his fault, it's Dusty's, Hendry's, Gene Clines', Sarge Matthews', Sonny Jackson's. It really doesn't matter. The guy played his way out of the big leagues.

Now will the Cubs take the steps needed to guarantee that 2006 is not a replay of 2004 or 2003? Start playing Cedeno everyday. Let's see if he's a big league SS. Play Murton. FIND A LEADOFF HITTER. Dump the few players the Cubs have that may have value to contending teams. Walker, Hollandsworth, Rusch, and Remlinger to start. The truck is running Gaius.

It looks like Corey will have some time off with his family in Atlanta. The Iowa Cubs series in New Orleans this weekend has already been postponed and next week is the AAA All Start game. The I-Cubs next game will be a week from today(Thursday).
Posted by CCD