the edge of the abyss

not that we can afford to look past the rockies, but i'm compelled to take a peek around the bend at what's in store for the cubs over the upcoming weeks.

it's something of a nightmare, folks -- more like a stare into the abyss, considering how this team is making it competitive with houston and colorado. 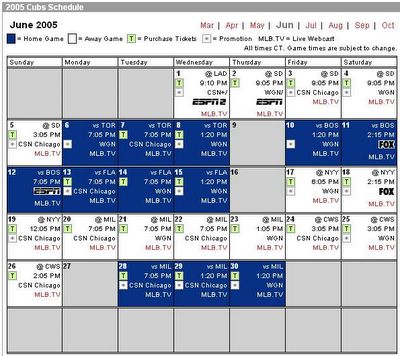 it's not just that our cubbies play a couple good teams here and there, either, or some flash-in-the-pan fast starters. the weighted winning percentage of the teams the cubs play between here and july 12 is .562. in no particular order let me mention: atlanta. four with san diego. the white sox. seven against florida. the yankees. boston. and seven against a milwaukee club that has already taken four out of six against them.

i'm not really sure what to say about this, except... except... well, except that, all false dawns aside, this season is over. the cubs, as likely as not, will likely be 15 back or more of the cardinals by the break and probably 8 to 10 games under .500. there's little reason to believe otherwise. wood and nomar won't return until it's too late to make a difference, and i doubt that they could turn this flawed team around.

as the trade deadline approaches, i'm increasingly convinced that the cubs should be a seller. they have assets that competitive clubs will want which are not fundamental to next year -- hawkins, maddux, a healthy and rested remlinger, hairston, walker, burnitz and maybe even hollandsworth. the openings left could help give the cubs a better read on what they have in players like dubois, mitre, van buren, fontenot, brownlie, pie, murton and others.

the trib paid a mint for this sorry club, and should shed expenses while it can. next season will be free and clear of the sammy debacle, and hendry (if he survives this) will have money to go fishing with. that's about the best this club can do for themselves now.
Posted by gaius marius