now that the cubs have snapped their slide on the 135-pitch back of carlos zambrano, i think it's finally safe to talk a bit more about it. in the grand scheme, a seven-game slide isn't the end of the world. but it may be significant. there's a sabr paper i haven't read by a man named keith karcher -- which is too close to "karchner" to contemplate -- titled "winning streaks, losing streaks, and predicting team performance" (included in this compilation). if anyone out there has read it, feel free to comment.

i can only suspect that the news isn't good. looking at the list of longest NL losing streaks, articulated on page 3 herein, one can see it (sensibly) is rare for good teams to suffer prolonged droughts. but digging into the cub archive from 1970 on, one finds that, even if a seven-game skid doesn't have to mean the end of a team, it does severely stack the deck. five of the ten winning teams and two of the four playoff squads since 1945 have suffered such an event; but, of the 23 teams since 1970 to slide seven consecutively, only 5 posted a winning record in the end. 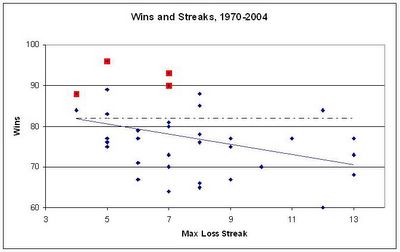 the unvarnished truth is that only ten cub teams in that span have gone over .500 -- what cub fans painfully know to be a small sample size. one has to dig deeper into cub history for winning teams to become plentiful enough to paint a more meaningful picture of winning teams and losing streaks. between 1900 and today, there have been 48 such cub clubs -- and plotting their longest losing streaks against their winning percentage gives some idea of the maximum potential of this club in light of recent events. 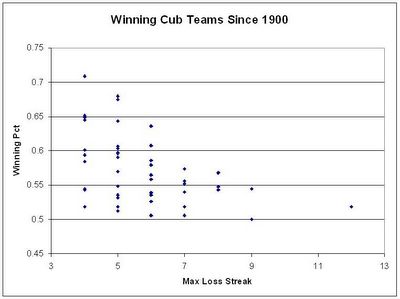 only twelve of the 48 winners suffered as many as seven straight losses, and only three of those 12 surpassed a .556 winning percentage -- the equivalent of 90 wins.

so dig in and hunker down, cub fans -- this isn't very likely to be a winning season anymore. but there's always the chance of an unlikely comeback and, barring that... next year.
Posted by gaius marius