where should they be?

i've made the assertion here many times that the cubs are a .500 club, even when they occasionally masquerade as a destitute loser and a playoff contender. it begs the question a bit -- why should they be average? why not better? or worse?

the answer to that question is two-fold. i've made the assertion by looking at winning and losing streaks thusfar that the cubs are likely to fall within a few games of .500 on the basis of their longest streaks in either direction so far this year. of course, the cubs could start a longer streak of some kind later this year and we'd have something new to talk about -- but, on the basis of what we know, even is likely.

secondly, we can assert that the cubs' pythagorean winning percentage -- which is figured from runs scored and allowed -- should give us an idea as to what level they'll play to. 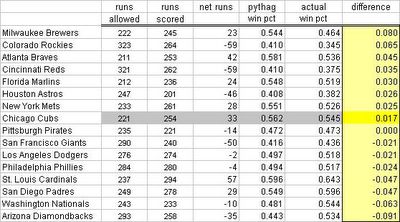 we sorted the NL by divergence from their pythagorean percentage -- so the brewers have underperformed their predicted winning percentage and could reasonably expect to have a better record than they do, and should fare better in the future than they have in the past, all other things being equal. we see that the cubs aren't getting cheated on this measure -- their record is very close to what would be expected.

the most obvious thing that could be said, however, is that the cubs pythagorean percentage is a lofty .562 -- and over the magic .556 that translates into 90 wins and wild-card contention. so why the continued view of a .500 outcome?

in short, the schedule. the cubs -- if they really are a good baseball team despite the manifold flaws we've articulated here -- are going to have to show it over the next several weeks. they've seen the weakest part of their schedule in april and may, and weak competition has probably swollen their net runs scored -- which is third-best in the NL at the moment. now they get the hardest in june and early july, and it will probably suppress their runs scored and inflate their runs allowed.

i have to say that the cubs performance in huge petco park against a really solid and streaking padres club -- taking three of four in style, outscoring them 22-11 -- was impressive. while wins against colorado and the dodgers could be pooh-poohed, this was something different. but then, neither four games nor ten games (in which the cubs are 9-1) nor 24 games (17-7 -- but who's counting?) do a season make.

if, at the all-star break, this cub team has managed -- in spite of the schedule, in spite of the injuries -- to keep scoring significantly more than their opposition, it might be time to re-evaluate the forecast i've put forward.

until then, though, i remain firmly in the .500 camp.
Posted by gaius marius