back when the cubs were taking a seven-game header, we posted a study of cub losing streaks as a means of putting what was happening into some kind of context -- and maybe giving us a peek at what might become of the cubs this year. the conclusion then was this: 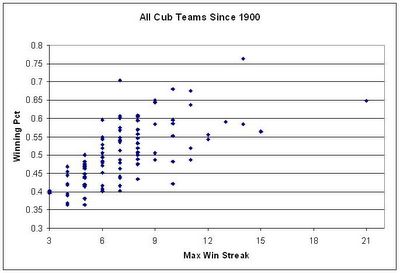 what does it mean? well, folks, allow me to analyze:

one would have to say, on the basis of this winning streak alone, that the cubs stand a good chance of being a winning team this year, but still face only a 1-in-4 chance of managing the 90 wins that has been the minimum to take the wildcard in 8 of the 10 years it's been in place. in other words: keep winning!

perhaps the more comprehensive analysis of the cubs streaks, however, is to use both the max win and max loss streaks in a ratio, and then compare this to winning percentage. while many of the best cub teams didn't go on extended winning streaks, very few of them ever lost more than three or four in a row at any point, keeping their streak ratio (wins:losses) over 2.0 in many cases. (the greatest ever cub team, 1906, won 14 straight against a longest losing streak of just 3 -- a 4.67 streak ratio, second best to 1935's 21:4.) conversely, some of the abysmal teams of yore may not have lost more than 8 or 9 straight, but likewise never won more than 3 or 4. 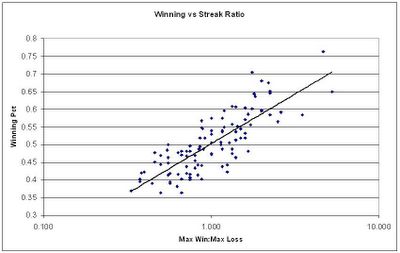 i included a logarithmic line of best fit as well, to illustrate how the regression manages to cross an even ratio (1:1) almost exactly at a .500 winning percentage. exceedingly few cub teams which couldn't manage a winning streak to match their longest losing streak -- just 3 of 50 -- got to even on the year; from a statistical point of view, these last seven games have reinstilled much of the promise that the losing streak removed.

but that promise remains only .500 -- for now. twenty-nine past clubs have run maximum winning and losing streaks that fall within a game in duration on either side of each other. the average winning percentage of those 29: .502. and only four of them -- a dismal 14% -- finished with a winning percentage greater than .556.

hopefully, the cubs rattle off another few to give me something more optimistic to talk about....
Posted by gaius marius