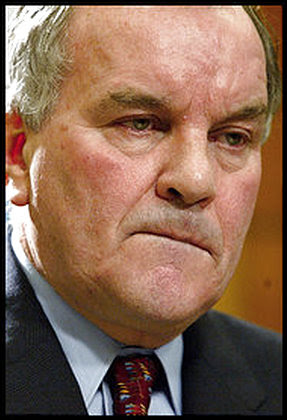 Apparently over the holidays hizhonor changed his mind. That's all that I can figure. Or maybe, just maybe Sam Zell, John Canning, Andy McKenna and all of the billionaires that will benefit from the rebuilding of Wrigley Field on the taxpayers dime got to Mayor Daley. So not even a month after saying this:

“We have a crisis at the CTA right now. It’s hard to believe . . . that people are now talking about taxpayers helping out the Cubs. The Cubs are not gonna move. It’s a gold mine. . . . If you’re gonna start holding this issue over the heads of passengers of the CTA and this crisis we’re in and they want to start talking about whether or not taxpayers are gonna buy [Wrigley Field] — that’s hard to believe.”

The mayor has changed his tune. He is now 'open-minded' to the deal that will allow Zell and a potential new owner of the franchise to benefit from the state buying Wrigley Field. In today's Bright One reporter Fran Spielman reported on Daley's change of mind. Think some of this has to do with the fact that Zell is a supporter of Daley?

Daley was cagey when pressed to explain his change of heart about the deal being pushed by new Tribune Co. CEO Sam Zell, a longtime Daley supporter.

"Well, I think they realize it's much more complicated . . . and that's very, very important. We have a crisis at the CTA, and we have to get that crisis over with for both the CTA and Metra for long-term funding. That is the priority we should have," he said.

But, if that's solved?

That change of opinion didn't take long. Never underestimate a politicians ability to help out those who can help him maintain his clout.

Crane Kenney (how long is this guy gonna be part of Zell's Tribune?) is happy the Mayor has changed his tune:

"Our goal from both the Tribune and the Cubs end is to do a transaction which preserves the field, ensures the team stays in Chicago and is an appropriate transaction for our employees who are now shareholders of the Tribune. If we can accomplish all three of those things, it would be a wonderful thing," Kenney said.

Crane, the goal of this transaction is to make the most money possible period. Stop with the rest of the bullshit please. Man, I think I liked it better when you were the man behind the curtain.

So we go from Daley and Crane to an unnamed source who seems to give alot of info, including the fact that no tax dollars will be used in the deal. The money will come from revenues generated by Wrigley Field:

"They now understand what it is that's been proposed. There's a lot of positives here for the city and state," said a source familiar with the deal.

"You get a 93-year-old landmark restored, the Cubs to agree to play on a long-term basis with terms determined before the sale of the team. The land and the stadium are almost entirely owned by the public. And money to renovate the stadium comes out of revenues generated within the building itself. No restaurant tax. No hotel tax. No property tax being diverted."

The old phrase used to be "If you believe that, I've got a bridge to sell you" apparently now it's not a bridge but a stadium, in this case a 93 year old decaying ballpark. As this plan actually begins to get a head of steam the truth is there is no such thing as a free lunch, one way or another Illinois taxpayers will foot the bill.
-------------------------------------
Corporate Welfare has become a little series for the crappy/unpopular. If you wanna see the past rants on this proposed idea and why it is bad for the taxpayers, here they are: