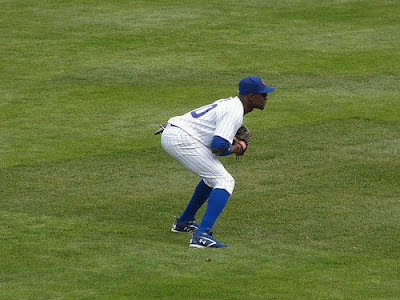 There is considerable head scratching going on over the ability of Felix Pie to perform at the plate if Uncle Lou inserts him as the 2008 Chicago Cubs everyday center fielder.

Now if we've learned anything about Piniella's style of managing his ball players it's this...if you don't perform, you don't stay a starter for very long.

It's amazing the 2007 Cubs outfielders didn't sustain any concussions since they weren't wearing their batting helmets on defense. Therefore, the additions of Fukudome and Pie should help considerably.

But what about the offense?

Well the triumpherant of Jones, Murton and Floyd manning center and right field in 2007, had a grand total of 22 HR's. Not very devasting offensive production for the new duo of Fukudome and Pie to overcome, and their speed and defense will never go into a slump.

But how much of a contribution to the offense will come from Pie? The Cubs still have the switch hitting Angel Pagan, who's speed and defense isn't much if any of a fall off from Pie's.

If Pie's inclusion in a trade, along with Marshall and Murton can fascilitate the acquistion of B. Roberts, Pie's contribution to the Cubs offense will be greater than if he ever takes an at bat in 2008.

Pie still has sex appeal to other clubs, but if he starts in center field this year and falters, he won't bring anymore back to the Cubs than J. Jones.

It would be great if the Cubs could acquire B. Roberts for just Murton and Marshall, but it seems Baltimore want's another player. The Cubs would be foolish to include another pitcher unless it's Dempster or Marquis, and it's probably beyond our wildest dreams that the Orioles would want either of them.
Posted by Klute