drop what you're doing (which probably isn't much if you're reading this) and go read this axiomatically perfect post at cub reporter.

the national league in 2004 sorted top-to-bottom in on-base percentage and runs scored is really quite close. is this statistical evidence?

more mathematically, if one takes the last three years of NL team statistics (2002-2004) and plots the ratio of runs/OBP against runs, one can correlate runs scored to OBP with an r-squared (a statistical measure of the degree of correlation between two sets of data) of .9262 -- which is nearer to 1.0000 (total correlation and dependency) than either batting average (0.8929) or slugging percentage (0.8204). on-base percentage is a more accurate indicator of run-scoring potential than either.

in fact, the only team really out of order in the 2004 resorting referenced above is... the cubs. how can that be explained? by abnormally high power output of the 2004 cub team (235 HR).

this led me to introduce a fourth correlative -- OPS. when the ratio of R/OPS is plotted against runs and subjected to an r-squared calculation, the result is 0.9312, the highest of the bunch. 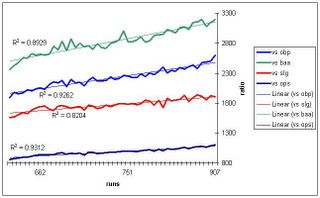 so what can we conclude? essentially, that dusty is wrong when he says hitting is the thing -- and that he was allowed to be wrong last year and still score because his team hit 235 homers. this year, however, with sosa and alou missing -- a double hit, in that neither their 74 home runs nor their 124 walks have been convincingly replaced -- things are likely to be different.

this is a team which is likely to decline in OPS from last year's fifth best showing, and that may indicate a lot of difficulty scoring in 2005. but we shall see.
Posted by gaius marius