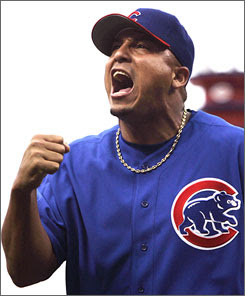 The deal that I thought would never get done. Is completed and was announced just a few minutes ago by Fox Baseball guru Ken Rosenthal:

The deal finally is done.

The deal, which includes a $19.25 million player option for a sixth year, is the highest ever awarded to a pitcher on a multi-year contract.

The deal ends up costing the Cubs a little more than it would have back in April, when due to the sale of the team they pulled the deal off the table. On the other hand the deal cost them less both in dollars and (probably more importantly) years than it would have had he hit the free agent market this winter. So now with the future of TribCo and the ballclub up in the air, I guess they figured they'd better ink their franchise pitcher and arguably most popular player:

The original deal between Zambrano and the Cubs was worth slightly more than $80 million. But the sale of the team delayed the completion of an agreement, and since then Zambrano's price has emerged as a Cy Young contender, raising his price.

So now Big Z has been given the big contract that will allow him to grow fat and happy as a member of the Chicago Cubs. Funny that earlier in the week Piniella and Rothschild pleaded ignorance when questioned about Zambano's health. So I guess if the Cubs had concerns those were put to rest. I know that makes me feel better (GULP).

According to Paul Sullivan the press conference is scheduled for this morning. Hopefully with the contract behind him Z can go out and pitch the way he did in June and July. His next start will be Sunday night on the four-letters national coverage versus the rival Redbirds. We'll all see how he handles his emotions.
Posted by CCD