A ninth inning to remember 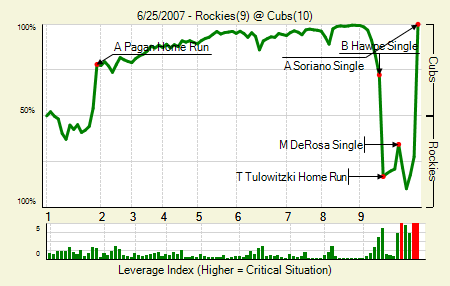 All that matters is at the end of the night the "W" flag was flying at the corner of Waveland and Sheffield.

For any Cub fan who watched the game, it was just another ride on the roller coaster that is being a Cub fan. After the Cubs took a 4-1 lead on Angel Pagan's first inning 3-run dinger, the Cubs were sailing to an easy victory. Mike Fontenot had a career night going 5 for 5. He had 2 runs, 2 doubles and 2 RBi. Mark DeRosa was 3 for 5 with 3 RBi.

So as I said the Cubs were on their way to an easy victory in front of over 40,000 fans at the ballpark. Of course there are very few easy wins for the Cubs and their fans. So this game went from easy win to disastorous loss to dramatic come from behind victory. Just another night at 1060 W. Addison. Jeez.

Let's get to the disastrous part of the ballgame. The top of the ninth was absoluteley inexcusable. Scott Eyre and Bobby Howry couldn't get anybody out. The Cubs blew a 5-run lead in the blink of an eye on Monday night. The disastrous top of the ninth looked like the Cubs were heading to another disappointing loss. Here were the specifics:

At this point Bobby Howry had a reason to look down. He was gonna be toast on Chicago sports radio programs all day on Tuesday.

What was so strange about the top of the inning is how fast it happened. It seemed like every Colorado hitter was swinging at Howry's first pitch. As Cub fans we have all seen too many of these bad acts at the end of games.

Yeah it was much better than the normal obligatory ninth inning rally, that generally falls a little short. They actually pulled off one of the most memorable wins of the season. Ladies and gents, something is happening with Lou Piniella's Cubs. They are starting to win the ballgames they were losing earlier this season. While the gap with Milwaukee is still very big, it is great to see this ballclub put together some fun wins and play entertaining ball.
Posted by CCD