last year at this time, this page wrote:

it's not just that our cubbies play a couple good teams here and there, either, or some flash-in-the-pan fast starters. the weighted opposition winning percentage of the teams the cubs play between here and july 12 is .562. in no particular order let me mention: atlanta. four with san diego. the white sox. seven against florida. the yankees. boston. and seven against a milwaukee club that has already taken four out of six against them.

i'm not really sure what to say about this, except... except... well, except that, all false dawns aside, this season is over.

the 2005 cubs, from june 1 to the all-star break, went 17-20, falling from second and 6.5 back to 12.5 and third in the division race, from 3 back in the wildcard to six. the run, though it could have been worse, effectively ended their year.

this year, the cubs again stand at the edge of a lower deep. 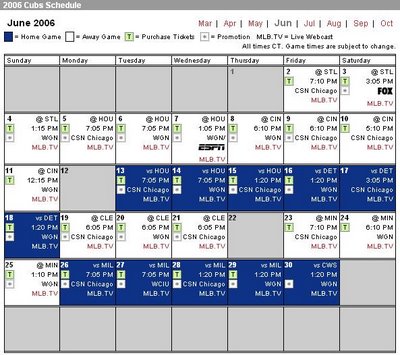 much as with last june, the weighted winning percentage of the 36 games between here and the all-star break stands at .534 -- somewhat less fearsome than the .562 of a year ago, but then the cubs also face it with a lesser team than they fielded a year ago.

it seems impossible that this cub team could fail the challenge as thoroughly as they did this month past. a weak-wristed derrek lee is almost certain to be in uniform before the end of the month, and even mark prior and wade miller stand some chance of returning to the rotation in the coming span. these additions (should they really transpire) may even make a passable .500 ballclub out of these cubs -- far too late, of course, for it to do any good.

and that may be the tragedy of it. comments by jim hendry in today's sun-times raise the spectre of a potentially delusional management off the rails, veiled from a rational assessment by some combination of paralyzing disbelief, an inadequate grasp of the rational and its own ego.

''We put ourselves in a bad spot, but it's still May 31,'' Hendry said Wednesday before the Cubs' 3-2 loss to the Reds. ''It's not just the Houston references. There's a long history in this game [of comebacks]. You can be 10 or 11 games under at the end of May and get it going.''

But it's a long shot, right? Wrong, Hendry said.

the implication of those last words give some comfort -- hendry may be saying these things because he understands them to be what he's supposed to say, as opposed to what he really thinks. the history of untruthful comments in the service of commerce is long in this franchise, after all.

but this is also the general manager that just traded for phil nevin, a piece of roster management that would make more sense coming from a franchise that saw itself in competition for something than from one which was building for the future. could a fleeting run of passable baseball feed that delusion and abdicate the july housecleaning that this club, nay, this entire organization so desperately needs to clear the detritus and filth that inhibits real promise? indeed, possibly.

this page would thus reiterate its plea for sensibility -- there is much work to be done, and none of it has to do with chasing chimerical hopes of winning in 2006. should this stretch of schedule serve to finally awaken andy macfail and jim hendry to the depth of the disaster extant, it would have achieved perhaps its highest possible purpose.

this writer has never rooted against the cubs and will not do so now -- but neither would this page be disappointed in another disastrous road trip to drive the psychic nails home. winning in the long term is probably best served by losing in the short term. here's to embracing what soon may come.
Posted by gaius marius