in the aftermath of failure analysis, having diagnosed some of the things which have gone wrong with the cubs at the major league level in 2006, some sort of prospectus on what lies ahead is the next necessary step toward divining a plan of progress. this entails an organization-wide scope, and is no easy thing to do. plans must be fluid to respond to injury and unexpected developments. 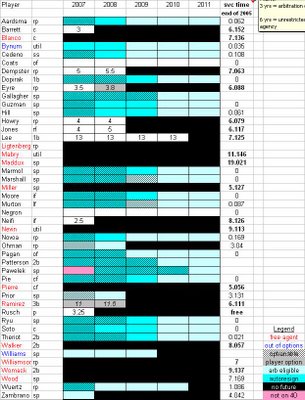 a good first step might be to lay out a five-year horizon of the cubs obligations and rights over players that have some expectation of interaction with the major league team. the one offered here is only generally accurate and changable -- but for the immediate purposes of this page is certainly good enough.

the approach of the july 31 trading deadline and the subsequent august 31 waiver deadline figure to change this picture somewhat. the obvious candidates for shipment are those at the end of their contractual term, who will be of no further use to the cubs but could aid a contending club over the coming weeks.

a look back at the trade deadline of the last few years may provide some useful context. most trades have the look of paul quantrill for tim redding and darrell may or alex cora for ramon vazquez -- the movement of major pieces is really quite rare.

moreover, there are frequently many fantasies indulged in around the deadlines about how valuable the veteran commodities of the team may be in terms of great prospects, but this page would warn against unrealistic expectations. if these following players were truly valuable, the cubs would be a lot better than they are.

juan pierre has hit so poorly since the end of 2004, and particularly this year, that the trade by which he was acquired increasingly seems another heist for florida despite the words of this writer.

i've never really considered mitre or nolasco to be Great Prospects, but reynel pinto is one of the better pitchers in the organization. considered as pinto for pierre, this isn't a bad trade, imo. glad they didn't have to cave in on another first-tier guy like rich hill or sean marshall.... it's a good trade because it was an all-but-necessary trade. kenny lofton is out there too for the right money, but he's not young anymore. pinto is a sensible price to pay, and i consider nolasco and mitre to be very little threat to be shutting out the cubs in years to come.

hope for pierre's redemption has given way to a more grim prognosis -- and in any case, the pierre trade can only be seen as a colossal failure for the cubs. pierre should be shipped if he can be, but he'll fetch nearly nothing and amount to a salary dump. equally troubling is a lack of places for him to go -- texas might be a possible destination, but gary matthews jr. would have to quit hitting first. no other contending club would have a need of pierre.

greg maddux is probably the cubs most marketable asset, despite not being a great starting pitcher anymore. his playoff experience in incomparable, and he would still make a good fifth starter for most contending teams despite the strength of starting pitching that tends to be the hallmark of winning clubs. still, in the twilight of his effectiveness, maddux probably doesn't merit more than a b-level prospect. while he probably retains more value than did tim worrell or al leiter last year, it may not be more than shawn chacon (who fielded ramon ramirez and edwardo sierra) or ron villone (yorman bazardo and mike flannery) or kyle farnsworth (roman colon and zach miner).

rumors of a handshake agreement to cooperate on a destination would seem to put arizona in the front of the possibilities -- maddux lives in las vegas, the d'backs could use him and they have prospects to deal. but the snakes have to stay close enough. houston (despite the impending return of clemens) or texas could be other possibilities, as could the yankees or boston be.

kerry wood isn't a reliable pitcher at the moment and so perhaps has a fraction of the value he might. but there is some speculation that he could be headed to texas, where he'll be a hometown draw -- a sort of poor man's roger clemens, in return for john danks or thomas diamond. these are legitimate prospects for a major league rotation, both former top-ten-overall draft picks, and this writer would count the cubs lucky if they landed anything like one of them for wood. either one would become the best pitching prospect in the cub system.

for that reason, one has to take the rumor with a grain of salt. the likelihood of a team giving up a certain young major league pitcher with a controllable contract for a player that is coming off labrum surgery and may very well never be a big league starter again -- sad facts that the cubs knew all along but only recently have begun to admit -- seems low to this page.

the likes of phil nevin, john mabry and tony womack are, for good teams, marginal bench players that carry little value in terms of trade. todd walker is probably the best of this lot -- but as has been shown by the failure of jim hendry's misguided efforts to find a trading partner for walker earlier this year, aging second basemen who talk too much, don't field exceptionally and have only modest power are not in high demand. this page would expect nothing of great consequence in return for any of them.

relief pitchers like scott williamson would fetch a b-level prospect if healthy, but probably little to get excited about and williamson isn't right anyway.

more attractive could be ryan dempster, bob howry or scott eyre, all of whom have significant remaining contracts and are better pitchers. any of them might be levered into a couple of prospects or possibly one good prospect, and it's to be sincerely hoped that they are. while all three have pitched well for the cubs, any of their equivalents in ability and contract demand are available every single offseason in the free agent market -- they are eminently replacable. for a team like the cubs, which has little enough down on the farm in terms of position players, so many young pitchers to sift through and so little prospect of contending in 2007 or 2008, there's simply no reason to hold an expensive, high-powered relief corps.

moreover, the uncertainty of his option combined with the near-total lack of position prospects in the cub farm to make aramis ramirez a significant question. more will be discussed about this in coming days in the context of an organizational position-by-position rundown, but the contract ramirez was signed to by jim hendry has put the team in an extremely uncomfortable position.

this page would not expect ramirez to be offered around -- replacing his kind of long-term production is nearly impossible -- but the possibility should be contemplated as he may well opt for free agency after 2006. for the right price -- meaning at least one star prospect -- he should be made available. the question of where a talent like ramirez might go is almost moot as so many teams could use him. boston has gotten good production from mike lowell, but lowell could play second ahead of mark loretta. detroit is suffering with brandon inge at third. with the cardinals short albert pujols, ramirez could be asked to play first -- and albert could play a corner outfield spot on his return. cincinnati starts rich aurilia at the hot corner. bill mueller is out for a month for the dodgers and could be relegated to the bench by aramis. the possibilities are clearly manifold.

in summary, then, with cost concerns becoming a pressure from higher up in the tribune company this page would expect significant movement from the cubs as the deadline approaches. the inventive to scrap and rebuild a moribund team combine with cost-cutting incentive to make the probability quite high. but what the cubs receive in return will probably not be earth-shattering without moving players like howry, dempster and ramirez -- and that seems all the more reason to make these dearer properties available.
Posted by gaius marius