the five back rule

some controversy has been generated by this writer's assertion that falling five back in a playoff race is usually tantamount to forfeiture. the rule is discussed in detail in the original posting, but the opportunity of an open discussion should be used to cite some more casework.

one can take the history of the cubs playoff teams as a narrower case of the broader sample. consider first the four previous cub playoff teams of the last 50 years. how many cub teams have come back from five games out to go to the playoffs in your lifetime?

so one of the last four cub playoff clubs came back from more than five out (5.5, to be exact) at some point in the year. this is admittedly a pitiful sample -- the source of unmeasurable angst throughout cubdom. but it can be expanded into earlier playoff seasons as well, going back to the first world war.

the point of this mildly tedious exercize is to highlight that a significant proportion of playoff teams do in fact at some point trail by five games -- five of the last ten cub playoff clubs have, for example. and indeed one can find that this proportion remains approximately constant for all teams -- houston, for example, has had nine playoff teams in their history. though the 2005 and 2004 teams both returned from deep deficits in remarkable defiance of the odds, five of them never trailed by more than five.

but how can we define the rule quantitatively in order to give ourselves a better analytical outlook?

of the ten teams since 1918 to make the playoffs, five never fell back by more than five. of the other 78 unsuccessful seasons, none ever remained fewer than five out for the duration.

based on this sample of cub teams and others, one might then note that the odds of reaching the playoffs are apparently diminished by approximately half when a five-game deficit is incurred, regardless of when during the season that tie comes. that is indeed a devastating blow, as the empirical chance of reaching the playoffs in the national league is only 1 in 4 to begin with.

however, it is apparent that perhaps there is a time-specific trend in the data as well. as was noted, falling out of the race on may 3 appears to be far more damaging than falling out at any point. indeed, no national league club in the last 50 who trailed by five or more on may 3 has come back to win that race. is there a correlation between when a team falls back by five or more and what the expectations of that team should be?

in studying the last 21 years of cub teams, it appears that in fact there is. this writer researched back to 1980 to find that while some teams fell five back very early -- in 1983, in fact, by the fifth game of the year! -- others didn't fall that far back until very late indeed or at all. 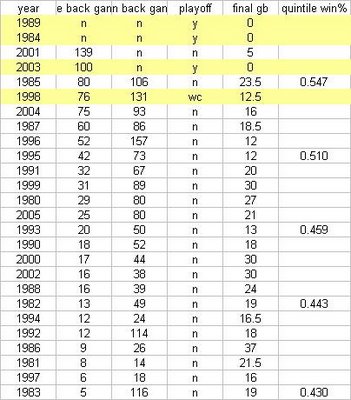 this chart illustrates the teams ordered by the number of games into the year the club first fell back by five games (second column). playoff teams are highlighted in yellow and noted in the fourth column. the third column indicates when the team first fell back by ten games, which is irrelevant to this study. the fifth column indicates how far back the team eventually finished in the divisional race. the sixth is the average winning percentage for each quintile.

as we can clearly see, none of the three division winning clubs in the sample fell five back until more than half the season had been completed. (it should also be noted that the 1998 club, which went into the playoffs via the wildcard, never trailed in the wildcard race by more than five at any point.)

also clearly, the earlier in the year that the club fell five away, the worse their average performance. while the five teams in the top quintile -- which on average stayed within five until the 129th game of the year -- amassed a collective .547 winning percentage, those of the lowest quintile fell out on average after just 9 games and posted a .430 success rate.

the trend in this data is quite prominent and makes rational sense as well. teams that are capable of staying within five of the leaders long into the season are by definition competitive and have a greater chance of ending up in the october mix. conversely, teams that fall away rapidly at the start are more often fatally flawed than simply unlucky -- most such teams are headed to the bottom of the standings.

this revelation now affords the reader a chance to mark an expected approximate winning percentage for this 2006 cub team, which first fell five back after 27 games. this point falls in the middle of the third quintile, whose average winning percentage is .459 -- a rate equivalent to a 74-88. one of the five teams in the quintile managed a winning season (1993, going 84-78) and none of them were a threat to reach a playoff position.

this page is sad to conclude that this is what best to expect from this 2006 team as well. it seems clear that expecting contention from this lot -- which has now slid to 6.5 back in the division and five back in the wildcard -- is but a fool's errand.
Posted by gaius marius