with the cubs season having mired in futility yet again, intrepid 1060west commenter bj last weekend took upon himself the responsibility of making his disgust with the 2006 cubs known in the most appropriate forum possible -- wrigley field. charitably, he put it to this site's readers to find the words to articulate those sentiments -- the results of which, with the aid of his lovely wife, became a bona fide exercize in passive but passionate corporate disobedience the kind of which this page should like to make an example for every attendee. 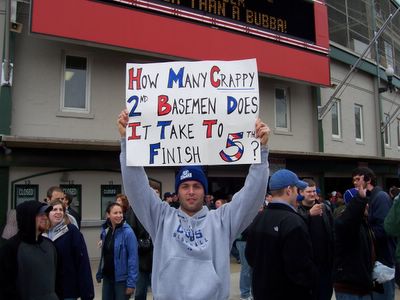 the message rings out loud and clear -- is there an answer forthcoming, jim hendry? or should we wait to see if you can arrange a trade for alfonso soriano? or, perhaps more likely, a waiver pickup of junior spivey? 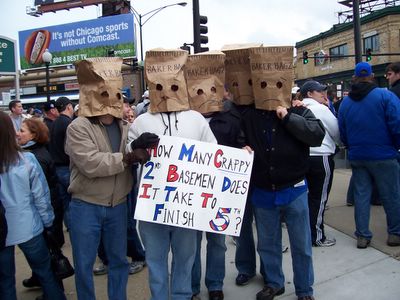 as one might have suspected, 1060west readers are not alone in their frustration. bj happened upon these fine young agitators in front of the park, exercizing their responsibilities to the ballclub with sparkling traditional aplomb. 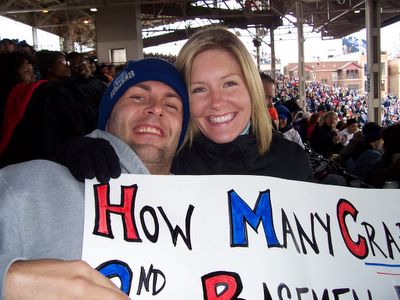 and here we see the sign, under bj's mindful watch, fulfilling its intended dual function -- both as a snarky vocal protest against the dullard apathy of the cubs ownership and management, and as a rallying point for bringing rational minds and aggrieved souls together in confraternity... and sometimes marriage.

our appreciation goes out to you, bj, for your everyday wit as well as your efforts to make the cubs a better team. big things often emerge from small beginnings, and each of our efforts -- however small -- in the end are material and change the world incrementally. while this page is certain that many of its readers will attend cubs games this year in spite of the counterproductive signal that the indulgence sends to the fiscally-obsessed management of this sorry team, it would encourage you to do so with the same consciousness of responsibility that bj demonstrated here. make your opinion known. small differences are differences nonetheless.