It's official Prior done with Cubs 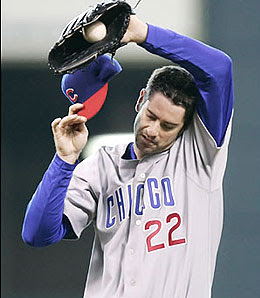 The pitcher, who once represented the Cubs tremendous hope for success this decade, was quitely dismissed by the Cubs this evening when Jim Hendry non-tendered Mark Prior. Prior wouldn't sign a one year deal that included a club option for 2009. From a baseball perspective this was the right move for Jim Hendry to make.
Mark Prior brings up so much emotion in Cub fans. He was the can't miss kid from USC who was the pride and joy of this franchise in the early part of the decade. How quickly that changes as sadly he could not stay healthy. The early hope and dreams associated with Prior in recent years turned to frustration as Prior spent more time on the DL. It became even more frustrating when the Cubs and Dr.'s couldn't come up with medical explanations for what was wrong with Prior. You can go into the archives of this blog and see some pretty mean things were said about Prior. In hindsight that was not fair. Finally in the spring of this season Mark Prior had labrum surgery.
At this point the fresh start is probably what is best for both the Cubs and Prior. Still those of us who watched Prior in 2002, 2003, and 2004 are left to wonder what could have been had he stayed healthy.
Posted by CCD