Before the 1972 season, the Cardinals traded Hall of Fame left-hander, Steve Carlton, to the hapless Philadelphia Phillies. In 1971, the Phillies finished in 6th place in the East with a record of 67-95.

Logic would tell you that Steve Carlton's performance would be adversely affected by the his new digs, considering the team he was coming from, the '71 Cardinals, finished 90-72. Sometimes, in baseball, even the best logic doesn't exactly play out as you'd expect.

In my opinion, Steve Carlton's '72 Cy Young was the most impressive Cy Young in history because of his relative excellence compared to his teammates. Take away 's 27 wins and 10 losses from the team's 59-97 record; you get a remaining record of 32-87 (.269). Extrapolating the non-Carlton .269 winning percentage over the team's 156 games, you are left with a Carlton-free record of 42-114. This is still quite a bit better than the 1899 Cleveland Spiders (20-134), but it WOULD put them comfortably in the neighborhood of the 1962 Mets (40-120); who are largely considered the worst team in the modern era.

Below is abstract of the five pitchers I considered candidates for the NL Cy Young (through 7/26): 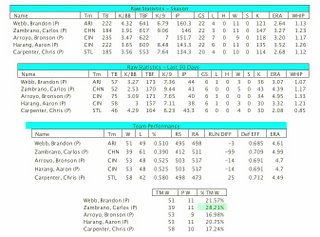 A very good argument could be made for each of these pitchers. Webb leads all candidates with a 2.64 ERA, Carpenter leads all with a 1.12 WHIP, and Arroyo and Harang have led ’s pitching-fueled, surprising ’06 season. However, like in ’72, the performance of Carlos Zambrano stands out from the rest because his dominance comes while competing on such a poor team. Carlos Zambrano is the 2006 NL Cy Young, if the season ended today.