The Cubs will begin the 2006 season with a trip to the Queen City. The Reds traditional National League Opener will start Monday afternoon at 1:10 CT. Tuesday will be an off day, so the Cubs get to go across the river to Kentucky for some fun. On Wednesday the Cubs and Reds will play at 11:35 CT.

Opening Day in Cincinnati is special. They even throw a parade before the game. Here's a link to a webcast of that parade.

The Great American Ballpark is a great place to start the season for the Cub hitters. Last season Derrek Lee hit 5 homers at Great American Ballpark, Ramirez hit 5, & Todd Walker hit 3 versus his former team. Hopefully the Northsiders' offense can get off to a quick start against Aaron Harang (11-13, 3.83 last season) on Monday. We all know Zambrano will be pumped. Hopefully he'll keep it all together against a good Reds lineup.

The Wednesday game is not what you'd expect for a second game of the year pitching matchup. Glendon Rusch will take on Bronson Arroyo(14-10, 4.51 last season) who just joined the Reds a few weeks ago in the trade that sent Wily Mo Pena to Boston.

Quick fact: The Chicago NL franchise is 17-9 against the Cincy team on Opening Day through the years.

Sunday papers: Sunday's Tribune will have their Annual Baseball Preview. 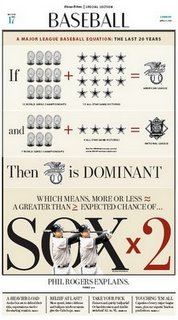 Looking at the cover it looks like Phil Rogers is making a case for a Sox repeat. We'll find out.

Enjoy Opening Day and enjoy the series everyone. It's great to have baseball back for 2006! And oh yeah, Go Cubs!