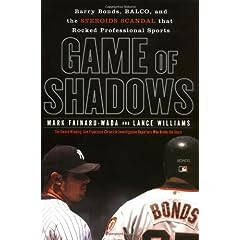 As Barry Bonds inches closer and closer to Babe Ruth's 714, I thought now would be as good a time as any to give you my take on the book Game of Shadows written by two San Francisco Chronicle investigative reporters Mark Fainaru-Wada and Lance Williams. As most of you around here know I am no fan of Bonds. (not really because of the steroids, I actually still like Sammy who was a juicer, I just cannot stand Bonds' attitude.)

As a baseball fan I know that steroids has left a scar on the game. Game of Shadows, like Eliot Asinof's Eight Men Out and The Dowd Report, detail the facts surrounding a very ugly episode in baseball's history. One has to keep in mind that Balco is only one episode in a very ugly steroid scandal that is still taking place in baseball and all of sports. The book is really put together well. The evidence, as you would expect, is overwhelming.

I picked up the book late last week while out of town on business. A couple of 2+ hour plane rides and I was finished. I am a slow reader, so this book is a fast read by my standards. Although we know the outcome of the book, the book details how Victor Conte, a nutritionist/modern day snake-oil salesman, set out to engineer the perfect athlete. Along the way Conte works with several athletes from track and field. Conte also supplies NFL star Bill Romanowski with performance enhancing drugs. He gets involved with Greg Anderson a childhood friend of Bonds who introduces Barry and several other MLB players to the "good shit" as Bonds calls it.

Along the way most of Conte's athletes in track and field are caught and suspended by the USADA for using performance enhancing drugs. The evidence against Bonds and the other MLB players is just as good. But Bud Selig and his cronies do nothing. Very interesting.

What I took away from the book was how easy Conte and his co-conspiritors could find new forms of steroids that could get around the "tough" olympic testing. We are always told that the olympic testing and the NFL testing are so good. That didn't stop Conte. How many companies are there right now that are making "good shit" that can't be detected by any of the current drug tests. As most of us already knew, this is a problem that's not going away any time soon.

One of the major problems with Game of Shadows is the writers might have written the book to early. As the Balco probe continues and investigations looks into whether Barry Bonds committed perjury when he testified to the grand jury in 2003. With Anderson being summoned to testify again before the Grand Jury, it still might be some time before the final chapter in this story is written.

As a baseball fan and a sports fan I would suggest that you pickup Game of Shadows. It's a fast read about a subject that is playing a massive role in sports today and I suspect will for years to come.

UPDATE: Al at BCB posted a review of the book on his site today. Take a look. He gives you some good details on what you'll find inside. I'd like to echo something that Al said at the end of his post:

This is an important book, and the story told within is not over. All of you should read it.

As a baseball fan, I couldn't agree more.
Posted by CCD