A right of spring?

In what has become an annual event for this Cub fan. Friday night I spotted him. He was once a Cub prospect that many compared to A-Rod. A shortstop that one day would be the cornerstone of the franchise. The first round pick from 2000, 3rd overall. The great Luis Montanez!

Last season I stumbled upon Montanez at Fitch Park putting in his time with the minor leaguers. On this March Friday night I found myself in Surprise, AZ watching the Cubs go through the motions against the Rangers. Down 5-0 in the top of the eighth, Montanez came to the plate. The Cub minor leaguer swung a hefty stick on this March night hitting a homerun to the left field gap. All I could do was stand up, clap and question "Luis Montanez?". Had the PA guy gotten this right? I couldn't believe it. There had to be some mistake. Where's Earl Cunningham? Is he on deck?

Sure enough. The boxscore at Cubs.com confirmed my sighting.

This moment may end up being the biggest moment in this #1 picks Cub career. Maybe not. Still I had to wonder. Is this "as good as it gets" for the once promising prospect. If it is, I'll never forget the night I was surprised in Surprise (Sorry, I had to use it) by Mighty Luis.

Sunday Papers
The Tribune has put together a Special Section in Sunday's Print Editions of the world's greatest newspaper. The section titled Wrigley A Fan's Guide To the Home of the Cubs(see below) 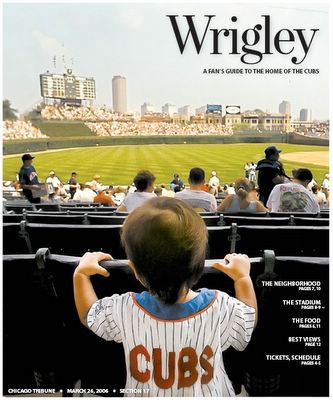 will give you an insight into what you should do in and around the ballpark on a gameday. Give it a look if you get a chance.

Ready or not Opening Day is right around the corner. Have a great weekend everybody.
Posted by CCD