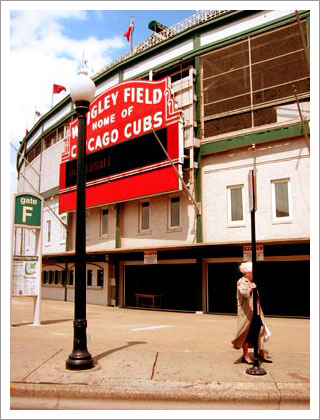 Last week it was revealed that the State of Illinois (which cannot figure out how to tie it's own shoes) was considering the idea of buying Wrigley Field. Of course, it was said that no tax money would be used, yada, yada, yada... When politicians say things like this, I wait for the other shoe to drop and the real story to come out. I think alot of the story came out earlier this week in Fran Spielman's Sun-Times report from City Hall:

The 1 percent tax on downtown restaurant meals that helped expand McCormick Place could move north to the area surrounding Wrigley Field to finance either renovation of the landmark stadium or improvements in the neighborhood, officials said Monday.

In the article the Cubs current caretaker Crane Kenney says:

"The city and state could say, 'Let's leave Wrigley Field as is.' But to the extent they do want to make improvements -- and we believe there's a real need for that -- they have talked about a variety of ways, including extending the food and beverage tax to include the Wrigley Field area. Those monies would go to support bonds issued for renovation," he said.

But Kenney stressed that having the authority that built U.S. Cellular Field acquire and renovate Wrigley was just "one of eight transactions" the Tribune Co. was reviewing. The other seven involve "private transactions" involving groups that would purchase the stadium and lease it back to the Cubs.

"It's an idea more than anything else. It may go nowhere. We're not even in the bottom of the first inning," Kenney said.

I suggested a week ago that this was a leverage move by Sam Zell so he can get a premium for the team and ballpark. I still believe some of that. I think most owners would want control of the historic ballpark. Apparently I am wrong on John Canning and his group. This from Michael Sneed's column last week:

• • To wit: Sneed hears rumbles the John Canning group, which is vying to buy the Chicago Cubs and includes Tribune insiders like Andy McKenna, were well briefed about the possible sale of Wrigley Field to the state -- and may have been trying to push it along because it would benefit them as possible future owners of the Cubs.

• • Isn't it true other groups vying for the Cubs had to wait to hear about it in the News? Questions. Questions.

When you start to connect the dots it looks like this is just another form of the corporate welfare system that baseball owners have benefited from over the past 20 years in town after town. Yeah the team is owned by billionaires and the players are millionaires, but the taxpayers should pay for the stadium. LMAO. Makes perfect sense.

Yesterday Sam Zell fresh off his pulling off the Tribune Deal stated this about the sale of Wrigley Field to the state of Illinois:

"We believe that transaction, when completely vetted, is very beneficial for the city of Chicago, is very beneficial for the Cubs, and for the future of a Major League Baseball team in this city," Zell said. "[Illinois Gov. Rod Blagojevich] originally approached us on this. We studied it; we thought it was an interesting concept. We started meeting with [Chicago Mayor Richard Daley's] people on it. We'll see where that goes."

Enter Cub fan and dumbass Governor Rod Blagojevich. Blago it seems has more interest in the Cubs than he does in his current job and his responsibilities to the taxpayers of Illinois. Blago proposes that the state finance a "$350 million" (wink, wink. you can't get a stop light at Clark and Waveland for under $half a million. How are you gonna rebuild the grandstand for $350 mill?). So once Blago proposes this, you can't blame Zell for being interested. Suddenly he could sell the Cubs at a premium because he has a ballpark renovation in place that will be financed by the state. You can't fault Canning and McKenna because they won't have to pay for the new stadium. You CAN fault any politician in Springfield that thinks this is a good idea.

Study after study has shown that publicly financed stadiums do not benefit the taxpayers. Back in 2003 the DC Fiscal Policy Institute released this study as their Mayor tried to attract an MLB team to the District of Columbia:

Publicly financed stadiums do not pay for themselves. A study of 25 stadiums built between 1978 and 1992 found that none of them generated a net increase in tax revenue for the host city. Even Baltimore’s Camden Yards, which is considered a highly successful stadium, is a net loser for the state.

As a matter of fact according to the 2003 book Public Dollars, Private Stadiums: The Battle over Building Sports Stadiums it has become accepted that stadiums provide little economic benefit to the communities they serve:

Nevertheless, there has lately been a noticeable shift away from economic promises and toward promises of social benefits. We believe this is not just random but reflects conscious strategic decisions by stadium proponents in each city. Proponents have realized that the path to publicly financed stadiums will be less problematic if they downplay the tangible economic benefits and accentuate the intangible social goods that might accompany stadiums. But like the existence and strength of local growth coalitions just discussed, these decisions are largely patterned by the unique structural landscape of each city. Stadium advocates certainly have some discretion about which strategies to employ, but certain cities lend themselves to making certain arguments about why it is in the community's best interest to build new sports stadiums with public dollars.

Contrary to what the owners will tell you, these billionaires can actually fund their own ballparks. In September 2006 a blog by U of I College of Law students published this:

A study done just two years ago contends that sports franchises can build their own stadiums without public subsidizes. [17]. The study reported that teams could recover half the construction costs within five years, and the entire cost within twelve years. [18]. Furthermore, within twenty years, a franchise’s revenues from the stadium could exceed construction costs by $100 million and $200 million in thirty years. [19]. Under this scenario, not only does the team get its new stadium, but the team has a continuous revenue stream that does not subject taxpayers to the burden of covering the stadium’s costs. Thus, if sports stadiums are really supposed to provide a boost to the economy, then they should do it without first imposing costs upon the community.

So what is going on here is Zell and Canning are using the state for their own welfare. While I am in full agreement that the Wrigley Field grandstand needs to be rebuilt, I cannot in any way shape or form say that it would be alright for the state of Illinois to foot the bill. Rebuilding the grandstand should be the responsibility of the new owner. They can finance it however they want. Sell the naming rights, advertising, or $15 beers in the bleachers. Whatever. Just not with taxpayer dollars.

I am not always on the same page as Hizhonor. But for his part, I have to give Mayor Daley some credit for his take on the whole idea:

“We have a crisis at the CTA right now. It’s hard to believe . . . that people are now talking about taxpayers helping out the Cubs. The Cubs are not gonna move. It’s a gold mine. . . . If you’re gonna start holding this issue over the heads of passengers of the CTA and this crisis we’re in and they want to start talking about whether or not taxpayers are gonna buy [Wrigley Field] — that’s hard to believe.

Ahhhh, has there ever been a more sensible yet corrupt politician than Daley? For all of his faults when he says things like that, it's hard not to agree.

Back to the Zell/Canning/Blago plan. The plan behind the whole idea is that the state will take over Wrigley Field for $1 and be responsible for the upgrades including a new grandstand. Because you can count on the state of Illinois to do things right! Take a look at the crumbling CTA system.

Remember 'no tax dollars will be used'. Former Governor Jim Thompson who heads up the stadium authority tells us that's the plan, for now:

The former governor acknowledged that "there would have to be neighborhood improvements along with restoration of the stadium."

But he said, "For the moment, I'm not looking at taxes. I'm looking at non-tax revenue" like the tax increment financing scheme now being used to bankroll a new $1 billion Yankee Stadium on a park across the street from the House that Ruth Built.

Maybe Blago's wife can get her hand into the cookie jar. At this point nothing would surprise me.
Posted by CCD