As Chuck explained over at Ivy Chat earlier this month the Cubs have every right to increase their tickets prices. When a team plays a season to 98% capacity, it's just basic supply and demand that ticket prices will go up. Combine all of that with the fact that the Cubs won the NL Central and they plan on increasing payroll again for 2008 and this thing was a slam dunk. So the letter went out today from Frank Maloney.

The Tribune's very own Paul Sullivan over at their Hardball blog broke down the increase that you see below in a spreadsheet:

another interesting note is how the prime dates have increased, more from Sullivan:

I've had a share in a season ticket plan since 1998. As much as I'd like to bitch and moan about this increase, it really doesn't matter. The Cubs have a waiting list of fans for season tickets. They won't lose any season ticket holders because of this increase. Come February they will break their own marks for single game ticket sales when they go on sale. Sadly it looks to me like the real question is was the ticket increase large enough?

More power to them.

UPDATE: Below is a copy of the letter sent to season ticket holders by ticket czar Frank Maloney. To view it click here (and use your magnifying glass tool). 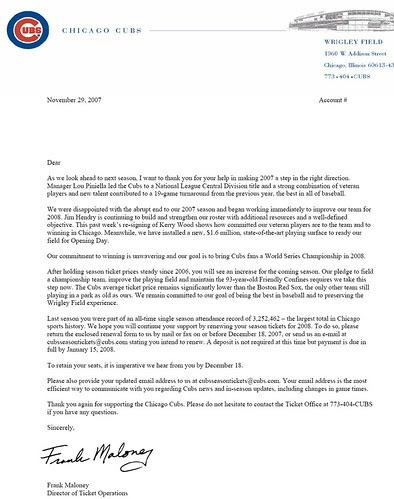