As the 2006 season moves toward completion it's looking more and more like the Chicago Cubs will do what this writer predicted and few believed, reach the 100 loss plateau. The question becomes how does an organization with all the advantages of the top teams in baseball become the worst team in the National League?

Well, all you need to know about the Cubs organization you can learn from reading a round table discussionthat occurred this winter. Representing the Cubs, and by extention the baseball philosophical dinosaur-side of the discussion was Jim Hendry's right-hand man, Gary Hughes.

I encourage you to read the discussion it is VERY eye-opening.

The basic premise of the discussion was how the various teams value certain types of talent, and by extention certain types of players. The article discusses the "Moneyball" concept choosing college pitchers over high school pitchers if the ability-levels are anywhere near equitible, because college pitchers have skill-sets (and bodies) that are much easier to predict a success-level as a professional.

The discussion covers various other topics, but the real reason I bring it up is just to highlight the dichotomy in baseball general management that still exists and is the main reason why the Cubs find themselves in last place in the worst division in baseball.

The player who represents all that is wrong with MacPhail/Hendry player valuation is centerfielder Juan Pierre. Many in the Cub Blogosphere have been calling for Juan Pierre to be given a long-term free agent contract following the season for such reasons as; "How long did it take us to find a lead off hitter?" or "Felix Pie is just the next Corey Patterson", or "Since the All-Star break his average has been great" or my personal favorite, "He's got 49 stolen bases do you know how valuable that is?"

Well let me tell you how valuable that is.

But wait folks that's not all.

Because Pierre is such an inefficient stealer of bases, his value is decreased even further. A caught stealing is in effect a reduction of a "success" at the plate, therefore the adjusted OBP formula becomes ([H+BB+HBP-CS]/[AB+SF+BB+HBP]). Juan Pierre's adjusted OBP is .3063.

To be completely fair, Juan Pierre's stolen base successes DO increase his nominal SLG. The adjusted SLG formula is ([TB+SB]/AB), giving Pierre an adjusted SLG% of .4754.

A "quick and dirty" formula to measure offensive value is "Runs Created" which is nothing more than OBP*TB, however if the two "adjusted" metrics are substituted for the nominal metrics (OBP and SLG) the statistic becomes more valuable (more statistically significant to run creation).

That being said, Juan Pierre currently has an adjusted Runs Created of 85.777 (.3063*280). To put that in context with the rest of the league's centerfielders I compared Pierre's performance with the league's 50 outfielders who qualify for the batting title (3.1 ABs/G). Below is the result of the analysis, however keep in mind Runs Created is a counting statistic and Juan Pierre leads MLB in ABs so his opportunities to create runs are higher in proportion to his ABs. 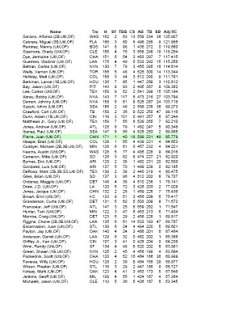 Juan Pierre is an AVERAGE offensive outfielder, when you consider his 2.21 RF (slightly better than average) and AWFUL throwing arm his defense can only be judged as average/below average.

All in all, Juan Pierre COULD be a useful player for a team like the Red Sox/Yankees/Mets that could bat him 7 or 8 in the lineup, however to a team like the Chicago Cubs, Juan Pierre's skillset/price tag make absolutely NO SENSE for the current state of the team. Even moreso when you consider, the organization has a player in AAA in Felix Pie that will produce at a Pierre-like VORP, given the opportunity, in 2007 for $330,000.

If you are one this unfortunate souls who still retain your season tickets to this sad-sack franchise, Juan Pierre will provide you with a leading indicator to whether or not the Organization has learned from its mistakes.

It's as simple as this, if Juan Pierre is signed to anything more than a 1-year contract for $4-5 million for '07 you can safely "lose" your renewal forms. That'll tell you right there, this team STILL DOESN'T GET IT.
Posted by Anonymous