Major League Baseball has taken it's fair share of criticism in recent years for it's piss poor marketing of the game. To be fair they have done some things right. The wild card has been a hit and they really have done a great job making games available through many different media outlets. You can now access TV and radio feeds of your favorite team anywhere. Games are found on the internet or through MLB Extra Innings or on XM Radio. 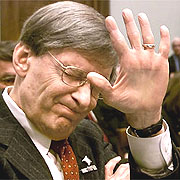 When this guys in charge is their any question why baseball pisses all over itself.

Still this is Uncle Bud's Show, so you know something is gonna go wrong. MLB decided to let local Fox affiliates choose the game you would watch in your region tonite. So as Game 2 of the ALCS was playing throughout Chicago, Cub fans were unable to see their Central Division rivals play game one of the NLCS. If you are a fan of one of the teams in the final four and find yourself out of town, well good luck. I guess you have a 50/50 chance of seeing the game you want.

How the hell does this happen? I know the other game was on FX. (according to Fox: FX is available in over 86 million U.S. households.) I'm not so sure about those numbers. I'll tell you this. I don't get FX on my DirecTV package and I rarely see it in hotels when I am on the road for work.

Why couldn't they start one of the games at 4:00 and the other at 8:00? Last week teams played day games throughout the ALDS and NLDS. Fans take off work and go to the games (accept in the ATL). Why not a late afternoon game? The NFL or NBA would never think of such a stupid plan. Of course neither of those leagues has a used car salesman as commissioner.
Posted by CCD